I have to admit, I’ve fallen in love with Trello as a productivity tool. If you like keeping lists as a way to organize your work, it’s a very good tool. For me, it serves two primary purposes: keeping a GTD framework, and managing certain projects with a kanban-like schedule.

But Trello is a closed source SaaS product, and I wanted to know whether I could find an open source alternative to meet my needs. As much as I love Trello, it lacks a few features that I’d really like to have in a list/task manager, and I wanted to explore my other options.

If you’re not familiar with Trello or the concept of a kanban board, it’s pretty simple. Items on a list are each treated as “cards.” Offline versions often use Post-It Notes moved across a series of bins. It’s based on a process developed for manufacturing, but widely adopted by the lean software development community. Cards might represent a feature, which is moved across a board to represent its flow through development, review, testing, and deployment. Digital tools often allow attachments to these cards: images, links, additional lists, a person assigned to the task, etc., and many have additional tools for giving you a fuller picture of how tasks are moving across a workflow. For people with a lot of production-oriented work, they also work well outside of the software development world. I use kanban boards for tracking everything from articles being written to home repairs.

But most kanban board tools are multi-purpose, and you can also use them to track next actions, someday/maybe lists, or even just what groceries you need to pick up. The killer feature of almost all of them is the ability to share your boards with a team, allowing group collaboration and keeping everyone on the same page. When looking for an open source tool to fit my needs, I came across five open source, free Trello alternatives and wanted to share a little bit from my experience with each.

First up is Taiga.io. We’ve reviewed Taiga before, and it’s one of our top project management tools. Whereas some project management tools seem to focus too much on including a kitchen sink of features, one of the things that I liked about Taiga when I first learned about it was its focus on simplicity and a clean interface. Taiga is also highly customizable and includes integration with a lot of other features and external tools, as well as a number of community-created tools.

Taiga does more than kanban boards, but since that’s what I am primarily interested in, that’s most of what I explored. I liked the ability to add custom fields, and the points system is something that teams might find interesting; reporting was also super easy. In addition to being an open source project you can download and run yourself, Taiga features an online hosted version. Public project boards are free, while private boards can be hosted for small fee.

Taiga is written in Django and on top of AngularJS, and is open source under aGNU Affero GPL. 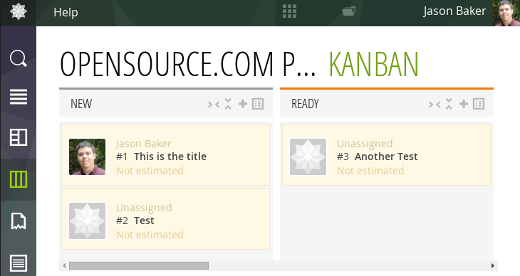 Kanboard is a fairly minimalist entry into the world of open source kanban boards. But don’t let the minimal interface fool you, it still hosts a number of featuresincluding task searching and filtering, subtasks, attachments, commenting, and more, as well as some decent analytics and reporting options. You can also easily export your cards in a variety of formats. Kanboard is easy to install, uses few resources (you can run it on a Raspberry Pi, for example), and has been translated to quite a number of different languages. It also has an online demo you can try out.

Kanboard is written in PHP and is made available under an MIT license. 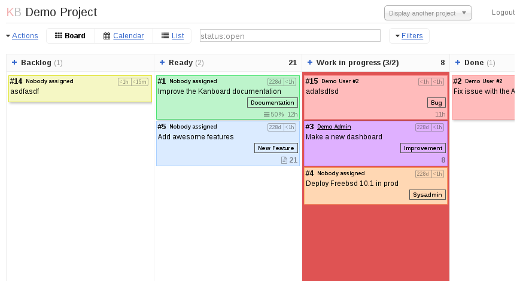 The next contender I looked at was Libreboard. Libreboard’s website had less information than some of the other projects I looked at, but it’s also fairly easy to jump in and try it out yourself. They have a free hosted demo site, or you can download and install it yourself. They make this especially easy, providing a Dockerfile for anyone interested in running it safely inside of a container, and it’s the only one of the projects that is integrated into Sandstorm.io if you’re already using that platform for hosting a personal cloud server.

Of all the kanban board tools I looked at, Libreboard is the one that most closely resembled the Trello interface. Both the front-end and the back-end are written in JavaScript, based on the Meteor framework. If you’re interested in following updates on the project, their own roadmap is done in a self-hosted Libreboard anyone can view.

Restyaboard attempts to pick up where Trello stops and extend the feature set a bit; they’ve got a handy comparison chart on their website which lays out their additional features pretty well. Their online demo shows off many of these features. If you’re already using Trello, you’ll appreciate the ability to import your tasks directly from Trello’s default format so you can get up and going quickly.

What I appreciated about Restyaboard was the templating feature (something my currently solution is lacking). They also have a handy API explorer, which makes custom integrations with other tools a breeze, assuming you’re willing to do a little bit of coding.

Restyaboard is written in PHP and is freely distributed under an Open Software License. 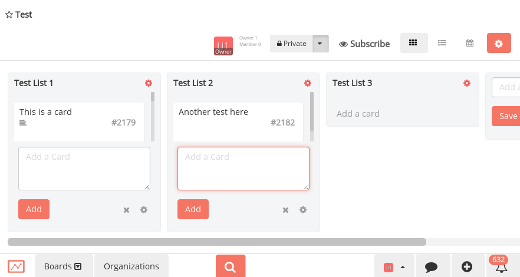 The final tool I looked at was TaskBoard. Like the others, TaskBoard also has anonline demo you can try out for yourself before you download and install it.

I found TaskBoard to have many of the same features of other tools I looked at, and that’s certainly not a fault. It’s a reasonably full-featured solution with filtering, comments, attachments, and most of the standard features of a kanban board I’ve come to expect. What I liked most about TaskBoard was its inline support forMarkDown, which has become my go-to format for writing. 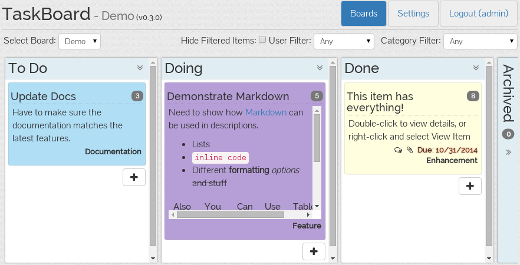